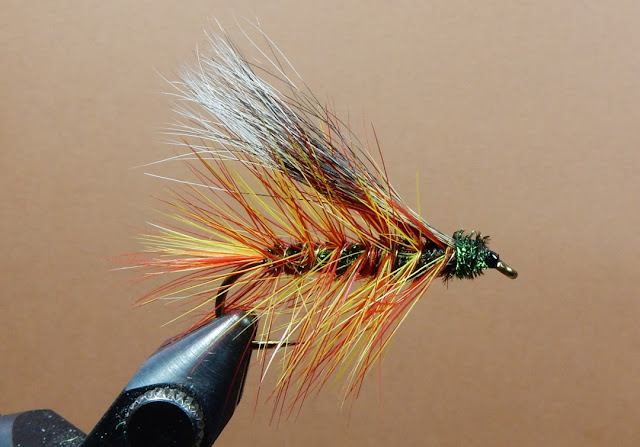 The recipe from the book

The scarlet and yellow body hackles should be "doubled" or "blended" together prior to tying in by the tips at the tail end of the fly, and then wound on as a single hackle, wet-fly style, over the peacock herl body.

The process of doubling, setting, or bending a hackle, as it is variously described, is quite easily accomplished by putting a hackle plier over an upright post and then catching the the hackle tip or tips in the hackle plier jaws, which leaves both hands free. The butt end of the quill is held with the right hand and the hackle fibers are folded over from the butt to tip with the left hand.

Posted by Normand Frechette at 9:42 AM

Great fly, both of them: The picture is of a Picket Pin, the fly pattern is for the Bloody Butcher.

no, the fly pictured and the recipe is exactly as described in George Grants book

The picket pin is tied with brown hackle and I believe was originated somewhere in New England, maybe Maine. Its interesting to see how almost the same exact fly was thought up in two different places...