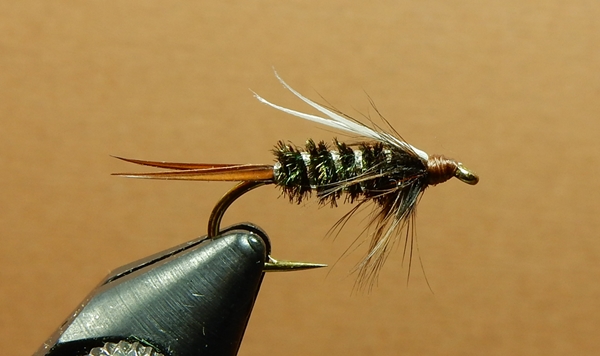 
Hook: Nymph/wet style
Bead: Tungsten or brass
Thread: Black
Weight: Lead wire
Tail: Brown biot
Body: Peacock herl
Ribbing: Oval/round silver tinsel
Collar: Brown hackle
Horns: White biot
From the internet
"The Prince Nymph, known first as a Brown Forked-Tail Nymph, imitates nothing – and everything – simultaneously.  It has an inherent ‘bugginess’ that trout find it irresistible.  Its split biot tail is bold, the glossy green peacock herl shimmers in the current, the soft hackle collar breathes seductively, and the tinsel and white wings scream for attention.  It is your basic sub­sur­face attractor, one that has been catch­ing trout for decades.  Many devotees profess that it imitates stonefly nymphs.  Indeed, a Prince Nymph does resemble juvenile stoneflies.  But, it resembles juve­nile Christmas tree ornaments just about as well.  Perhaps trout take it as a stonefly, but a cased caddis larva, caddis pupa, mayfly or dobsonfly nymph, or even a drowned terrestrial seem equally plausi­ble. Does it matter?  Not a bit.  Prince Nymphs ap­peal to trout, and that’s what counts when you’re fill­ing the fly box or tying a clinch knot.
Doug Prince of Monterey, CA is often described as the originator of the Prince Nymph, but it was devel­oped and first tied in the 1930s by Don and Dick Olson, brothers from Bemidji, MN.  They called it the Brown Forked-Tail Nymph.  It acquired its princely name in a roundabout way during the 1940s.  Buz Buszek, namesake of the Federation of Fly Fishers’ annual award for fly tying excellence, owned a fly shop and mail-order business in Visalia, CA begin­ning in 1943.  He employed local tyers to supply flies for the shop.  Doug Prince was not a commercial fly tyer, but he was Buszek’s good friend and tied flies for him for one year in the 1940s.  Prince was a tal­ented fly tyer who knew California rivers well.  He tied his name­sake fly for California’s Kings River, but he called it the Brown Forked-Tail Nymph, presumably in refer­ence to the Olson original.  Buz Buszek was hur­riedly preparing a new mail-order catalog one day, and he wanted to in­clude Doug Prince’s peacock-bodied nymph that was so effective.  Buszek couldn’t remember the fly’s name, however, and in haste he just called it the “Prince Nymph”.  Buszek’s catalog was distributed throughout the West, and the fly at­tracted a loyal following.  Doug Prince’s name spread with the fly, although he played no part in its self-congratulatory name.  Doing so was not in his humble charac­ter:  “I tied what worked for me, and that’s all I ever really wor­ried about.”  Doug Prince received the FFF Buz Buszek Memorial Award in 1982 but said at the time that he had “no idea” why."
Posted by Normand Frechette at 7:45 AM