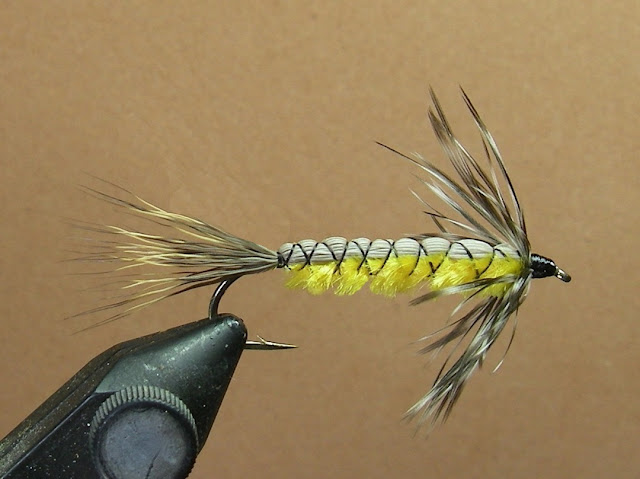 Per the recipe in the book

(size "c" thread is probably no longer available, so use whatever thread you like)

Deer hair back and tail are an integral unit. Tie in the hair at forward body termination as for wing and then tie down to bend with open spirals of heavy black tying thread.

History (from the book)

Legend has it that this fly was the creation of an amateur fly tyer in the Bozeman, Montana area and this could well be for it is very popular on the Gallatin river.

Dan Bailey of Livingston, Montana was tying a similar fly as early as 1940, calling it the "Yellow-Bodied Grayback" and still carries it in his current catalog (remember this is in a book from 1972).

There are several similar patterns, such as the Horner Deer Hair, the Goofus Bug and the Humpy. Which is a variation of the other is a moot question, but the fact remains that they are all basically the same and all are excellent.

Most of the above-mentioned deer hair patterns are tied with upright hair wings and in comparatively small sizes as they are essentially dry flies. The "Crazy Goof" on the other hand, is one of the very best flies to use when big hoppers are being blown on the water and is probably at its best when it is used in a large size.

The name of the fly is not at all appropriate as the dressing is extremely sane. The coloration is moderate and the liberal use of deer hair makes it a good floater.

Thats it from the book.

Montana Trout Flies by George F. Grant has a copyright of 1972 so some of the tying threads called out in the book are probably no longer made or hard to acquire. I guess that if one looks hard enough you could find some spool of "nymo" thread.

The heaviest I tie with is 6/0 so that's what I used for the fly in the foto.

Happy Tying
Posted by Normand Frechette at 9:38 AM

This is a great pattern in my neck of the woods. Allot of luck with various panfish with this fly.

This is a great pattern, allot luck with this fly in my neck of the woods. Nicely done.

277I too like tying and fishing the "old" patterns as they have not been seen by the quarry that exists now.
Where I mostly fish every critter can tell who the manufacturer of the fly and especially the beadhead patterns are.